The ceremony featured opening words by Chief Gundam Officer (CGO) Koji Fujiwara explaining the statue’s construction was to convey the appeal of Gundam not only to Japan, but also to Asia and the rest of the world. Gundam creator Yoshiyuki Tomino then appeared over video to comment on the differences between the original RX-93 Nu Gundam and RX-93ff version. In the press release for the statue’s announcement it was stated the director supervised its design.

Toru Furuya, who famously portrays Amuro Ray in the Gundam series, took the stage to discuss his thoughts of the Nu Gundam and his role in the upcoming Mobile Suit Gundam: Cucuruz Doan’s Island film.

Gundam songstress Hiroko Moriguchi then gave a mini live concert performing her rendition of the iconic Mobile Suit Gundam: Char’s Counterattack theme song, “BEYOND THE TIME ～Möbius no Sora wo Koete～”, followed with her signature “Mizu no Hoshi e Ai wo Komete” Mobile Suit Zeta Gundam opening theme, and “Ubugoe”, the theme song for the Doan film, of which she was announced to perform.

Located on the fourth floor of Mitsui Shopping Park LaLaport FUKUOKA in Hakata-ku, Fukuoka City,Gundam Park Fukuoka is stated to be the birth of a new Gundam entertainment complex where information, merchandise, sports entertainment, and amusement of the Gundam series are gathered in one place. 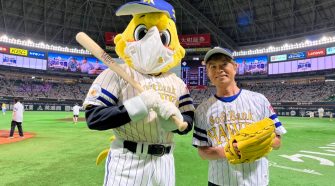