Titled Mobile Suit Gundam: Char’s Counterattack Official Records Collection —BEYOND THE TIME—, the set will include a three-sided box with illustrations of the RX-93 Nu Gundam and MSN-04 Sazabi by their original mechanical designer, Yutaka Izubuchi. The collection will include the following contents:

The Mobile Suit Gundam: Char’s Counterattack Official Records Collection —BEYOND THE TIME— is priced at 14,300 yen with a September 22, 2022 release date. Pre-orders can be made at the “Sunrise Store” in Premium Bandai, the official Bandai Namco Arts mail order site “A-on STORE”, and other retailers.

Set fourteen years after the One Year War in U.C. 0093, the Yoshiyuki Tomino-directed Mobile Suit Gundam: Char’s Counterattack serves as the final confrontation between legendary rivals Amuro Ray and Char Aznable. Char has risen to power as leader of Neo Zeon and plans an all-out assault to decimate the Earth’s population to revive the planet. Released to theaters in 1988, Char’s Counterattack grossed 1.16 billion yen at the box office. 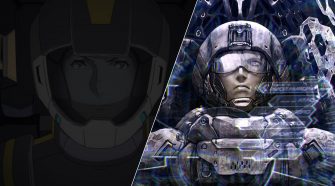