The event will be multifaceted, taking place across the different areas of the Gundam Park facility: Gundam Side-F, VS PARK with G and namco.

A “Garapon lottery challenge” will be held for visitors who spend 950 yen or more at Gundam Park Fukuoka to get a ticket to participate in the raffle to win various prizes. The prizes includes an HG 1/144 Gundam Aerial, RX-93ff Nu Gundam Statue acrylic stand, both autographed by Kana Ichinose, who portrays protagonist Suletta Mercury in the Witch from Mercury, original limited edition stickers, a pair of tickets to “VS PARK WITH G”, or a free ticket to a namco crane game.

In Gundam Side-F, a statue of XVX-016 Gundam Aerial will be displayed, along with commemorative photo opportunities.

Those with purchase receipts from Gundam Side-F will get  500 yen discount to VS Park with G.

At namco, standees of the main characters from the Witch from Mercury will be displayed throughout the area.

Last week, the Gundam Park facility announced its life-sized RX-93ff Nu Gundam attraction’s winter lighting event, commencing from December 4 to February 2023. A “WINTER TREE” objet d’art based on the RX-93ff will sit at the foot at the statue, adorned with a tree topper of Amuro Ray’s personal mark, and a wreath with the RX-93ff’s V-fin as a motif. 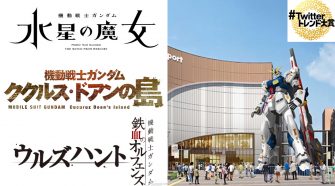