Reina Ueda portrays the alluring, yet perceptive and mysterious Gigi Andalucia in Hathaway’s Flash. Shown to be free-spirited, she has a large financial backing and is the object of many men’s interest.

The Producer finished the “Q & A” session by answering @GundamOtakuman asking “When do you plan to release the second film in the trilogy? I’m looking forward to it.”, Ogata responded, “Thank you very much. Part 2 is now in production, so please be patient. Here’s Director Murase at a mechanical meeting for the second part. With his permission.” and humorously posted the director wearing the Hauzen Flight 356 pumpkin-head hijacker mask from the film.

Hathaway’s Flash in its first week sold a total of 53,674 Blu-ray copies at 215 theaters, including 34,222 copies for the limited edition and 19,452 copies for the regular edition. The Blu-ray sales have far surpassed the 6,772 copies of Mobile Suit Gundam The ORIGIN: VI Rise of the Red Comet in 2018 and the 19,998 copies of Mobile Suit Gundam Unicorn episode 7 Over the Rainbow in 2014.

Next Hathaway’s Flash is Targeted to Adults 30s and 40s, According to Bandai-Namco 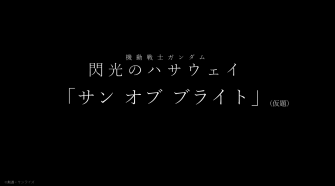