On Sunday, April 24, Moriguchi sang “Ubugoe” live for the first time at the opening ceremony for the life-sized Nu Gundam statue at Mitsui Shopping Park LaLaport Fukuoka in Fukuoka, her hometown. The new single containing the song will be released on June 1 with the accompanying tracks “Ima wa Oyasumi” (I’m Going to Bed Now), “Eien ni Amuro” (Amuro Forever) with VOJA, and “Ubugoe (Instrumental).”

The single will have a standard edition and a first-press limited edition that will include the “Ubugoe” music video. Another limited edition will be available at participating theaters that includes an LP-sized jacket. Both limited editions feature artwork by director Yoshikazu Yasuhiko.

The title track “Ubugoe” is written by Goro Matsui and composed by doubleglass, with Keiichi Tomita as music producer. The lyrics focus on the feelings of Cara, a girl who takes care of Doan’s younger children in the film. Moriguchi, who says that she was moved by Cara, sings warmly, tenderly, and powerfully to the theme of “motherhood”.

Hiroko Moriguchi began her career with the debut single “Mizu no Hoshi e Ai wo Komete”(“From the Aqueous Star with Love”), serving as the second theme song for the 1985 TV anime series Mobile Suit Zeta Gundam. She has since become known as the “Gundam Goddess” for performing many songs for the Gundam series, including “Sora no Kanata de”, the theme song for Mobile Suit Gundam The Origin: Eve of Destiny and “Eternal Wind ~Hohoemi wa Hikaru Kaze no Naka~” for the 1991 film Mobile Suit Gundam F91.

In March, Moriguchi released the third and final album in her Gundam Song Covers series. The series features Moriguchi collaborating with a variety of artists producing unique renditions of classic Gundam songs. 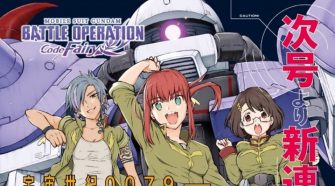