The MA-1 originated as the successor to the A-2 flight jacket in 1945. This LIGHT MA-1 jacket is based on the L-2B flight jacket (the lightweight, all-season variant of the MA-1) and is essentially a normal MA-1 jacket with all the padding removed. This Mobile Fighter G Gundam-inspired LIGHT MA-1 NATUS jacket presents a striking silhouette and comes with a detachable hood, making it more stylistically versatile. The jacket features emblem patches on both the sleeves and front such as the “King of Hearts” emblem, “The School of the Undefeated of the East” and “GF13-017NJII”, the model number for Domon’s signature mobile fighter, God Gundam.
The actual fabric has a high-quality texture with just the right amount of sheen. It is likewise lightweight and comfortable, regardless of the season.

The STRICT-G ALPHA MA-1 NATUS Mobile Fighter G Gundam Domon Kasshu model is priced at 39,600 yen, releasing November 19, 2022 to STRICT-G stores in Japan, with Premium Bandai pre-orders shipping later in November. All customers who purchase the jacket from STRICT-G or Premium Bandai will receive an acrylic stand with an original illustration of Domon.

Mangaka Kazuhiko Shimamoto(Blazing Transfer Student, Blue Blazes) was tapped for character design drafts for the series by producer Masahiko Minami, who had been a friend and classmate to Shimamoto at Osaka University of Arts. The final character designs are handled by Hiroshi Osaka(The Vision of Escaflowne) coming off Mobile Suit Victory Gundam. The mechanical design team included Hajime Katoki, Kimitoshi Yamane, and veteran Kunio Okawara. 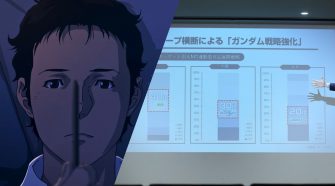