Designed by Hajime Katoki, the OZ-06MS Leo is a mass-produced general purpose mobile suit featured in the 1995 New Mobile Report Gundam Wing series. Developed by OZ(Order of the Zodiac), the Leo is among the most prolific mobile suits used in the series, utilized by multiple factions but most notably by OZ and United Earth Sphere Alliance.

Designed by Kanetake Ebikawa, the GN-0000+GNR-010 00 Raiser is the combined form of the GN-0000 00 Gundam with the GNR-010 0 Raiser, primarily piloted by protagonist Setsuna F. Seiei in the Seiji Mizushima-directed Mobile Suit Gundam 00 series.

The RX-78GP01Fb Gundam GP01Fb “Zephyranthes” Full Burnern is designed by Shoji Kawamori(of Macross fame) as an upgrade to the the RX-78GP01 Gundam GP01 “Zephyranthes”, retrofitted for space-use. The mobile suit is piloted by Earth Federation pilot Kou Uraki. 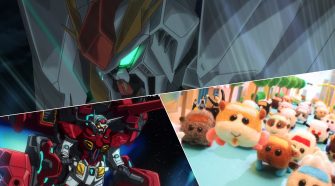