Anime studio Sunrise has released an opening video for Mobile Suit Gundam: Iron-Blooded Orphans- Urðr-Hunt, featuring its theme song “The Over”. The tune is performed by Ryutaro Fujinaga from the band Elements Garden with vocalist kayto, a part of a new unit named Re:End.

A new key visual has also been released for Mobile Suit Gundam: Iron-Blooded Orphans G, a new smartphone app set to release spring 2022 where fans can re-experience seasons one and two of the TV series through gameplay and anime components, as well as the spin off story, Iron-Blooded Orphans- Urðr-Hunt.

A special edition of Mobile Suit Gundam: Iron-Blooded Orphans was announced during the 2nd Gundam Conference in September 2021 to coincide with the release of Mobile Suit Gundam: Iron-Blooded Orphans G. The special edition totals nine episodes and is described as a “digest” version of the series, set to premiere on the MBS, Tokyo MX, and BS11 Japanese TV stations starting April 5, 2022, along with parts of Urðr-Hunt featured in the broadcast.

Wistario, who hopes to change the status quo of his homeland, encounters a girl who claims to be the guide to the “Urðr-Hunt”.

Directed by Tatsuyuki Nagai and scripted by Mari Okada, Mobile Suit Gundam: Iron-Blooded Orphans began airing October 2015. Set in the bleak Post Disaster era, the series follows a group of child soldiers—Mikazuki Augus, Orga Itsuka, and several others as they are hired to protect a young aristocrat seeking to liberate the Martian colony from Earth’s rule. When the tyrannical Earth peacekeeping force Gjallarhorn threatens those involved, Mikazuki must head into battle using a Calamity War-era relic—the Gundam Barbatos. Michinori Chiba and Yu Ito designed the characters for the series, with a mechanical design team consisting of Naohiro Washio, Ippei Gyōbu, Kanetake Ebikawa, Kenji Teraoka, and Tamotsu Shinohara. Masaru Yokoyama provided the music composition for the series. 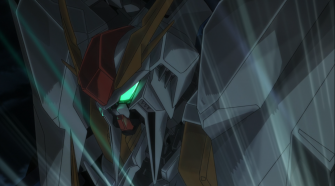