At the event, the prototype figure for Lunamaria Hawke was displayed, without a price or release date.

Lunamaria Hawke is one of the major supporting characters in the 2004 Mobile Suit Gundam SEED Destiny series. As a member of ZAFT, boarding the main battleship LHM-BB01 Minerva, she pilots her own custom ZGMF-1000 ZAKU Warrior.

SEED Destiny is the sequel to the 2002 Mobile Suit Gundam SEED series, with  Mitsuo Fukuda and Chiaki Morosawa returning as director and head writer

At MegaHobby Expo 2022, only a teaser announcement display was featured for the GGG Suletta Mercury and Miorine Rembran figures.

Suletta Mercury is the protagonist of the Mobile Suit Gundam: The Witch from Mercury TV anime, portrayed by Kana Ichinose. Suletta is described as second-year student in the piloting department, who transferred to the school from Mercury. Suletta is timid and somewhat lacks communication skills. She is the pilot of the Gundam Aerial developed on Mercury by the Shin Sei Development Corporation.

Miorine Remran is portrayed by voice actress Lynn and is described as an attractive and academically distinguished second-year student in the management strategy department. Miorine is the only daughter of Delling Rembran, the president of the Beneritt Group and chairman of the school’s board. She has a strong rebellious feeling towards her father. 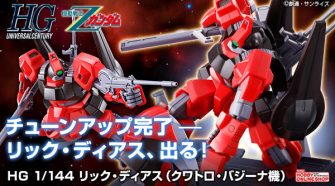