Based on Amuro Ray’s RX-93 Nu Gundam from the 1988 Mobile Suit Gundam: Char’s Counterattack film, originally designed by Yutaka Izubuchi, the RX-93ff version sports a new long-range Fin Funnel and tricolor markings designed under the supervision of Gundam creator Yoshiyuki Tomino. The RX-93ff is touted as being the tallest of the four Gundam statues at 24.8m.

The ROBOT SPIRITS <SIDE MS> RX-93ffv Gundam is priced at 5,500 yen with a May 2022 release date. The figure will be sold exclusively in Gundam Park Fukuoka’s Side-F shopping center. Tamashii Nations is also developing the Nu Gundam for their die-cast Chogokin figure line. 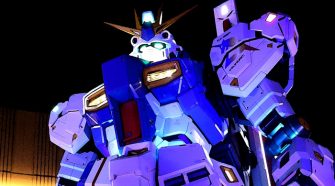