During the campaign period, all players who log in to the game will receive the normal suit and helmet worn by Hathaway Noa in the film.

A celebratory photo panel will be set up at base camp during the campaign. Take a commemorative photo with the pilot’s new emote, “Hathaway Pose!”

３. You can watch the first video of Mobile Suit Gundam: Hathaway’s Flash on the monitor space!

During the campaign period, you can watch the beginning of Mobile Suit Gundam Hathaway’s Flash on the announcement monitor that appears when you log in for the first time every day. You can also watch it at the monitor space in base camp. 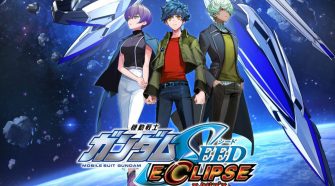