During the show, more footage and characters were shown for the upcoming spin-off, Mobile Suit Gundam: Iron-Blooded Orphans- Urdr-Hunt.

Kenji Nojima as Cyclase Mayer, pilot of the Schwalbe Custom.

Yuko Sanpei as 598, pilot of the Monkey Rodi.

Earlier, it was announced former Nogizaka46, AKB48 idol and actress Rina Ikoma was cast as the protagonist Wistario Afam. Wistario is a boy born and raised on the Radonista Colony above Venus. His parents died when he was young, and inherited the colony management company, Afam Equipment. He is a cheerful and decisive person, and has a big dream to make Venus a tourist destination.

Kenyu Horiuchi, who played Mashymre Cello in the 1986 Mobile Suit Gundam ZZ series, will portray Demner Kitaco Jr., Wistario’s caretaker and teacher who has been secretly maintaining the Gundam Hajiroboshi. 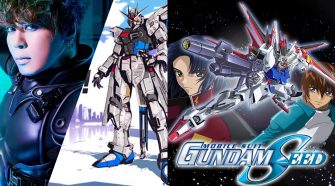