The figure stands approximately 19cm in height, wearing a pre-painted white normal suit. The head can also be replaced with additional head parts. The pose of him holding a gun while equipped with a Landmover was inspired by the final episode of the series, “Riders in the Skies”.

The figure is priced at 14,850 yen with a late October 2021 release date. Anime publisher and retailer RightStuf is releasing the figure for 155.99 USD a month later on November 30. 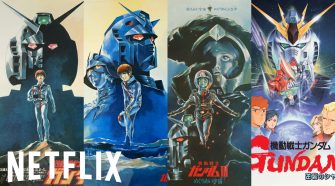