AnimeJapan, one of the world’s largest anime consumer showcases, is holding its first in-person event after two years of COVID-19 related cancellations. In 2021, an online event was held instead. AnimeJapan 2022’s theme will be “Cue! to the convey the message of “the fun and joy of animation” as the event aims to push forward with the feeling of making a new start amid the ongoing coronavirus pandemic. The 2022 event will take place at Tokyo Big Sight in Tokyo, Japan on March 26 and March 27, 2022.

Gundam Reconguista in G IV and V are the final two installments in director Yoshiyuki Tomino’s planned five-part recompilation film series for the 2014 TV anime of the same name. The film series was announced in November 2018 as a part of the Mobile Suit Gundam 40th Anniversary Project. The compilations were to include new scenes and newly recorded dialogue. Gundam Reconguista in G III: A Legacy from Space released July 2021 to Japanese theaters and then to home video in December.

After enduring the battle at Jaburo, the Earth Federation Forces plan to launch a major counteroffensive to capture Odessa, a strategic base of Zeon’s Earth Attack Force. The White Base, with Amuro and his fellow crew aboard, head towards Belfast to receive the last resupply before the operation. White Base is then given a mission. The mission is to mop up Zeon remnants on an uninhabited island, commonly known as the “Island of No Return”. Amuro and his team embark on a search for the remaining agents, but what they see is a group of children and a Zaku that should not be there. After losing his Gundam in a battle, Amuro meets a man who calls himself Cucuruz Doan. Will he be able to uncover the secrets of the island, and will Amuro be able to find the Gundam again and escape safely……?

Also announced during the “2nd Gundam Conference” in September 2021 by the Bandai-Namco Group, Mobile Suit Gundam the Witch from Mercury is the highly anticipated first new Gundam TV anime series in seven series, since the broadcast of Mobile Suit Gundam Iron-Blooded Orphans.

The series is currently shrouded in mystery as far as plot or staff, but is stated to focus on attracting teenagers. Bandai-Namco Group will be working with external “G-PARTNER” members on the series to aim for “large-scale deployment than ever before”. 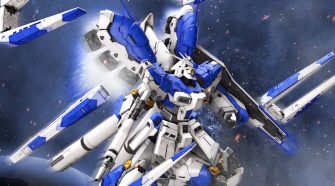