In the year 0079 of the Universal Century, the war between the Earth Federation and the Principality of Zeon has reached a stalemate. However, when Zeon learns about the Federation’s new mobile suits being developed at the Side 7 space colony, Char Aznable launches an attack to destroy them. A boy named Amuro Ray finds himself caught up in the conflict when he becomes the unwilling pilot of the Federation’s new mobile suit – the Gundam.

The Moore Brotherhood, an Earth Federation Forces unit made up of surviving citizens from Moore, set out to exterminate the Zeon forces in the Thunderbolt Sector in order to reclaim their homeland. To halt the Federation advance, the Zeon forces deployed their own Living Dead Division, which was established to collect combat data on soldiers with prosthetic limbs.

Io Fleming, though part of the Moore Brotherhood, hates being tied down by his homeland and family history. Daryl Lorenz, having lost his legs in earlier battles, is now an ace sniper of the Living Dead Division. When they confront each other on the battlefield, they will reach a mutual realization. These two are destined to kill each other.

In Mobile Suit Gundam Thunderbolt – Bandit Flower: Earth, eight months after the end of the One Year War. Captain Monica launches a secret mission, Operation Thunderbolt, and selects Io to pilot the Atlas Gundam. She leads the assault landing ship Spartan into a part of the ocean effectively controlled by the South Seas Alliance. Their objective is to secure or destroy the data of the Psycho Zaku, which the Alliance now possesses.

Daryl, who took the upper hand in his battle with Io, has descended to Earth as part of the remnant forces of the Principality of Zeon. He has also been given the mission of obtaining information on the Psycho Zaku.

Universal Century 0087. The Titans, a bellicose faction among the Earth Federation Forces, grows powerful and tyrannical, even using poison gas to suppress a civil unrest. Dissident soldiers from the same military stand against them, forming a resistance group called the A.E.U.G.. Kamille Bidan, a civilian student, gets entangled in this conflict when he accidentally steals the Gundam Mk-II and joins the A.E.U.G., running away from his home space colony. Then he begins to fight along with Char Aznable, a former Zeon ace pilot who has infiltrated the Earth Sphere for reasons of his own.

U.C. 0097, one year after the opening of “Laplace’s Box.” Despite the revelation of the Universal Century Charter that acknowledges the existence and rights of Newtypes, the framework of the world has not been greatly altered. The conflict later dubbed the “Laplace Incident” is thought to have ended with the downfall of the Neo Zeon remnants known as the Sleeves. In its final battle, two full psycho-frame mobile suits displayed power beyond human understanding. The white unicorn and the black lion were sealed away to remove this danger from people’s consciousness, and they should now be completely forgotten. However, the RX-0 Unicorn Gundam 03, which disappeared two years earlier, is now about to show itself in the Earth Sphere once more. A golden phoenix… named Phenex

Released in 2010, Mobile Suit Gundam 00 the Movie:—A wakening of the Trailblazer— is set two years after the end of the Gundam 00 TV series, directed by Seiji Mizushima.

2314 A.D. The new government of the Earth Sphere Federation is carrying out a program of peaceful reconciliation and preparing for the appearance of the Innovators who will lead the human race into a new era. But the return of a derelict Jupiter exploration ship marks the beginning of an unprecedented crisis. What are the alien entities known as Extraterrestrial Living-metal Shape-shifters? What do they want? And will Setsuna F. Seiei and his fellow Gundam Meisters be able to answer these questions before humanity is wiped out?

Also directed by Mitsuo Fukuda and scripted by Chiaki Morosawa, Mobile Suit Gundam SEED Destiny is the sequel series to Gundam SEED, airing from 2004 to 2005.

But one boy, Shin Asuka, is finding that incredibly hard. A coordinator who lost his entire family during the Battle of Orb, he now fights with ZAFT in one of their newest machines, the Impulse Gundam. Of course, ZAFT is only developing these machines for defensive applications – or so they claim – but when a group of Federation operatives steal some of these prototype machines, the world is once again plunged towards war.

The Gundam Reconguista in G compilation film series was announced in November 2018 as a part of the Mobile Suit Gundam 40th Anniversary Project. The compilations were to include new scenes and newly recorded dialogue. Released in 2014, Gundam Reconguista in G celebrated the 35th anniversary of the Gundam franchise and saw the return of Gundam creator himself, Yoshiyuki Tomino helming a major Gundam title for the first time in fifteen years since 1999’s Turn-A Gundam.

Gundam Info will be streaming the first three entries from the film series: I: Go! Fighter, II: Bellri’s Fierce Charge, and III: Legacy from Space.

Photon Batteries, Earth’s energy source, are brought down from space via the Capital Tower protected by the Capital Guard. Bellri Zenam, a Capital Guard cadet, gets involved in fending off an attack of pirates during his first practical training session, and helps to capture them. He feels something mysterious with the captive girl Aida and finds himself being somehow able to activate the high-performance mobile suit that she calls ‘G-Self’. Staged in Regild Century, the era that comes after Universal Century ends, the boys and girls advance directly towards the truth of the world through their adventures. 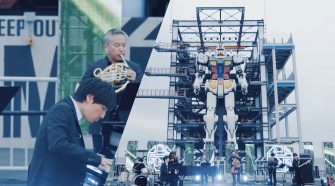