Announced November 18 by Sotsu, Bandai Namco, and Sunrise, from November 20 to February 13, 2022 the life-sized Unicorn Gundam statue in Diver City Tokyo Plaza will have a limited light show for the winter season.

This year’s winter-only lightshow will feature the Unicorn Gundam illuminated with warm, gentle lighting from Christmas to Valentine’s Day, as well as a specially designed Unicorn art piece that will serve as a memorable photo spot for couples, families and loved ones visiting Odaiba this winter.

In addition, beginning November 27 to March 31, 2022, “Gundam Special Movie for Lovers” will be new nighttime video for the “WALL-G” video screen. This is a short movie that focuses on the bonds between the characters in the Gundam series. It is composed of a number of memorable scenes from the series to provide an opportunity for those who visit with their loved ones to deepen their bonds.

The RX-0 Unicorn Gundam statue was erected in 2017 at DiverCity Tokyo Plaza’s Festival Plaza in Odaiba, Tokyo, based on the titular mobile suit from the 2010 Mobile Suit Gundam Unicorn anime series. Unicorn adapted the bestselling novel of the same name into a seven-part OVA(original video animation) series directed by Kazuhiro Furuhashi and scripted by Yasuyuki Muto. The novel was published by Kadokawa Shoten from 2007 to 2009, penned by Harutoshi Fukui with character designs by celebrated animator Yoshikazu Yasuhiko and mechanical designs by Hajime Katoki.

Next “The grim reaper won’t come when you’re ready for him, Hathaway” Voted Favorite Line from Hathaway’s Flash 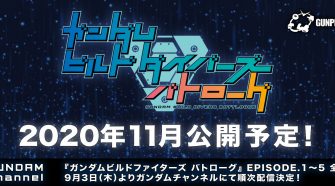