The official Netflix YouTube Channel of the anime wing for the streaming giant has released an interview with Hiroyuki Sawano, composer for the Mobile Suit Gundam Hathaway’s Flash film. The interview sees Sawano discuss his involvement, inspirations and composition process on the film. The interview is spoken in Japanese with multiple subtitle options.

“I’m Hiroyuki Sawano, a composer for film and television.”

Q: Did you listen to music from past series for inspiration for Unicorn?

A: There are many Gundam series following the first one, and many different composers created music for them. Of course, I knew that. But for me, rather than getting influenced by the music of the past series, I wanted to…Well, the director and producer offered me the job because they were interested in my past work so I decided to simply create music that I genuinely felt fitting for Gundam. I didn’t really worry about the music from the past series. Actually, it was only after I finished composing for Unicorn, that I started to buy CDs and listen to music for the past Gundam series.

Q: What was your experience creating the music for Hathaway?

A: The offer for Hathaway came at that timing, so I got worried. I was a little concerned that the music might be compared with that of Unicorn. But actually…by the time I went into production I was able to start with a refreshed mind.

Q: What was your first impression of the story of Gundam Hathaway?

A: I was told that Hathaway would be entertainment, just like Unicorn, but they were aiming to create something more for the adults. I was aware of that point. They let me see some images during the meetings,and I realized how the textures and the atmosphere created by the characters were different from Unicorn. So I aimed to create music that would match producer Naohiro Ogata’s idea to be a Gundam title for adults. Yeah.

Q: During what stage of production did you start to compose the score?

A: It’s when the scenario is mostly prepared. In my case, I try not to create music to match the picture. Basically, it’s the same as a TV series. I receive a “music menu” beforehand, and then start creating music for the number of minutes they need. So at an early stage, when they have the scenario, and they know what kind of music they’d like, I ask for a meeting at that stage. I remember having a meeting at the time when the scenario was ready.

Q: What kind of direction were you given to compose for Hathaway?

A: For Unicorn, I composed music with straightforward melodies, but for Hathaway, I was told it should be like recent Hollywood movies where melodies are suppressed and removed to some extent, and emphasis more on the sound that can express the world of the film.

Q: What does it feel like to bring your music to life with other musicians?

A: Seeing musicians playing along with my sheet music, especially when they are putting emotions to my music, it definitely influences me. It makes me feel that I’m creating the music with those musicians, so I get more attached to that music. So I think that recording is a very important process.

Q: Do you also conduct?

Q: Do you have a message for people who will watch Gundam Hathaway?

A: Hathaway is my third Gundam title, following Unicorn and Narrative. Every time, I try to express my thoughts toward Gundam music of that time. For Hathaway, through meetings with
director Shuko Murase and producer Ogata, I think I was able to pursue my own style of Gundam for adult audiences. I want people to enjoy the movie along with the music. Now that the soundtrack is streaming, listening to the music alone can let you enjoy it in a different way I’ll be happy if you can enjoy that as well. Yes.

Q: Do you have plans in the future to go abroad and play your music?

A: Actually, I’m not a big fan of airplanes, but it makes me happy to see people overseas listening and reacting to my music. I’d like to go abroad if I have the chance, and if there’s demand for it. So yeah, in the future I hope to participate in events abroad.

Renowned composer in the fields of anime, drama and film, Sawano has been in charge of the music for many hit anime titles such as: Attack on Titan, Sengoku Basara, The Seven Deadly Sins, TRIGGER’s Kill la Kill and Promare, including the Gundam entries Mobile Suit Gundam Unicorn, its sequel Mobile Suit Gundam Narrative and recently Mobile Suit Gundam Hathaway’s Flash.

Beginning in 2010, Mobile Suit Gundam Unicorn adapted the bestselling novel of the same name into a seven-part OVA(original video animation) series directed by Kazuhiro Furuhashi and scripted by Yasuyuki Muto. The novel was published by Kadokawa Shoten from 2007 to 2009, penned by Harutoshi Fukui with character designs by celebrated animator Yoshikazu Yasuhiko and mechanical designs by Hajime Katoki.

Mobile Suit Gundam Narrative released to theaters in November 2018 as the first entry in Sunrise’s “UC NexT 0100” project. Loosely adapting Mobile Suit Gundam Unicorn’s eleventh volume Phoenix Hunting, the film serves as a sequel to the Unicorn anime series. The film is directed by Toshikazu Yoshizawa and scripted by Harutoshi Fukui, with character designs by Sejoon Kim, and mechanical designs by Hajime Katoki and Eiji Komatsu.

First in a trilogy of anime films helmed by director Shukou Murase, Mobile Suit Gundam Hathaway’s Flash or Hathaway is the official sequel to the 1988 Mobile Suit Gundam Char’s Counterattack movie. The film series was announced in November 2018 to celebrate the Gundam 40th anniversary as the second title in Sunrise’s “UC NexT 0100” project, adapting the Yoshiyuki Tomino-penned novel series of the same name. The novels were originally released from 1989 to 1990, as a follow-up to Tomino’s Char’s Counterattack: Beltorchika’s Children novel, published by Kadokawa’s Kadokawa Sneaker Bunko imprint. 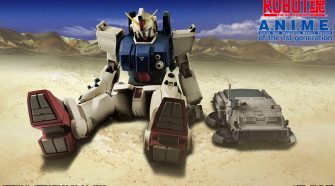