U.C. ENGAGE is a war simulation game that allows users to play through all of Gundam‘s Universal Century works old and new, combining animation with game play. Players can experience Universal Century battlefields firsthand through simple controls and auto-play in powerful 6 vs. 6 battles with realistic 3D mobile suits.

Of the newer Universal Century titles will be Mobile Suit Moon Gundam animated for the first time.

Next is a new story titled 0079 Gibraltar, depicting the duel in Gibraltar between Amuro Ray and Char Aznable as seen in the Mobile Suit Gundam THE ORIGIN manga. Releasing from 2001 to 2011, THE ORIGIN is a retelling of the 1979 Mobile Suit Gundam by Yoshikazu Yasuhiko, character designer and animation director of the series.

Announced in 2014 to celebrate the 35th anniversary of the Gundam series, Yasuhiko’s manga was adapted into a six-part OVA series. Released from 2015 to 2018, THE ORIGIN explores the events leading up to the One Year War, detailing the origin of Casval Rem Deikun, who would go on to become the legendary rival and Zeon figure Char Aznable.

Anavel Gato served as the main antagonist and rival in the 1991 Mitsuko Kase and Takashi Imanishi-directed Mobile Suit Gundam 0083: Stardust Memory series. The year is Universal Century 0083, and three years have passed after the One Year War ended with the Principality of Zeon’s defeat. The Delaz Fleet, a group of Zeon remnants, launched an attack on the Earth Federation’s Torrington Base, leading to Gato stealing the prototype RX-78GP02A Gundam “Physalis”, a mobile suit with nuclear launch capability. Kou Uraki, an Earth Federation test pilot at Torrington Base, is selected as the pilot of the GP02A’s sister unit RX-78GP01 Gundam “Zephyranthes” and joins the Pegasus-class carrier Albion as it pursues the stolen GP02A in order to stop the Delaz Fleet’s ultimate goal: “Operation Stardust”.

Peche is a sixteen year old Newtype candidate trained at the Flanagan Institute. She volunteered to become a pilot, following in the footsteps of her adoptive father, Captain Orgun, a technical officer in the Zeon forces. However, her mobile suit piloting skills are far from combat level, and her abilities as a Newtype are low.

Mobile Suit Gundam U.C. ENGAGE is free to play with in-app purchases scheduled to launch in 2021 in the App Store and Google Play. Presently the game is exclusive to Japan. 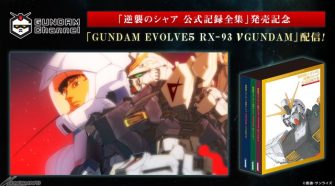