In an interview with Da Vinci News, mechanical designer Seiichi Nakatani spoke with the publication about the principal mobile suits featured in the Mobile Suit Gundam Hathaway’s Flash anime film.

When it came to designing the RX-105 Xi Gundam, the mobile suit piloted by protagonist Hathaway Noa(Mafty Navue Erin), Nakatani mentions the mecha was intentionally designed to look removed from what a Gundam type mobile suit traditionally looks like, and to be more monstrous than its dragon-like sister unit RX-104FF Penelope.

Da Vinci: The Xi Gundam has an unique design that makes it look like it has two faces.

Nakatani: Having two faces was something that I was conscious of when I was designing. It’s more like the face on the top part of the chest is a fake Gundam face, the actual head is made to feel like a monstrous, fiendish image removed from a Gundam. Director Murase said that he wanted to give a stronger “monster feeling” to the Xi Gundam than the Penelope.

Renowned mechanical designer and Gundam series mainstay, Haijme Katoki adapted Moriki’s original designs for the film. From there, Nakatani and fellow designer Nobuhiko Genba were in charge of incorporating them for animation.

Da Vinci: The second and third parts of Hathaway’s Flash are planned for the future. How do you plan to approach this?

Nakatani: This time we only had night battles, so some people said it was hard to see the mobile suits, but I’m hoping to make more of a spectacle in the next installment. The stage for the battles will probably not be at night, so I hope to express the air, atmosphere, and wind next. I’d like to use the experience of Part 1 for Part 2 and beyond.

First in a trilogy of anime films helmed by Ergo Proxy director Shukou Murase, Mobile Suit Gundam Hathaway’s Flash or Hathaway is the official sequel to the 1988 Mobile Suit Gundam Char’s Counterattack movie. The project was announced in November 2018 to celebrate the Gundam 40th anniversary, adapting the Yoshiyuki Tomino-penned novel series of the same name. The novels were originally released from 1989 to 1990, as a follow-up to Tomino’s Char’s Counterattack: Beltorchika’s Children novel. 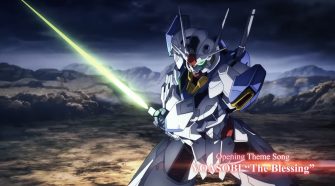