Possessing the same battle system as Mobile Suit Gundam: Battle Operation 2, the story of the game consists of fifteen episodes divided into three volumes; the first volume was released today November 5, volume 2 will be released on November 19, and the final volume December 3 according to Japan Standard Time. The game can be purchased in full with standard or deluxe editions priced at 6,000 yen and 7,700 yen respectively, alternatively each volume can be purchased separately for 2,000 yen each.

Masayoshi Tanaka serves as character designer(Anohana, Darling in the FRANXX) for the game, with Kyoshi Takigawa on mechanical designs, and Mobile Suit Gundam Narrative’s Toshikazu Yoshizawa will be directing the project as well as animation direction and storyboards. Popular anisong artist Maon Kurosaki will be performing the game’s theme songs “Fly high the ’Fairy’” and “Lights.”.

To coincide with Code Fairy, Bandai Namco hobby subsidiary Bandai Spirits have announced the Premium Bandai release of three new Gundam model kits of mobile suits appearing in the game: Black Rider, White Rider and Efreet Jaeger. More details of their release will be announced at a later date. 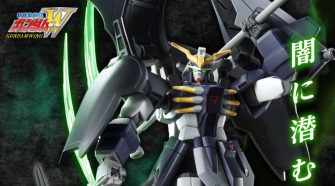