Gundam model kit facility chain The Gundam Base, has announced they will be celebrating the tenth anniversary of the Mobile Suit Gundam AGE series with a Mobile Suit Gundam AGE World exhibit. Beginning September 4, 2021, the free exhibition will be held at the main Tokyo and Fukuoka locations, as well as their Nagoya and Kyoto satellites, with varying content at each site.

During the event The Gundam Base locations will be selling special Gundam AGE model kits such as the HG 1/144 Mobile Suit Gundam AGE MS Set [Clear Color]. The set is priced at 6,600 yen and will be available at all four locations from the start of the exhibit, including the four Gundam AGE mobile suits used by the Asuno family.

The HG 1/144 Gundam AGE-2 SP Ver. will be available at the Tokyo and Fukuoka locations beginning September 18, priced at 1,650 yen.

“The destinies of the three, will make history”Conceptualized and scripted by game developer, President and CEO of Level-5, Akihiro Hino, Mobile Suit Gundam AGE aired from October 9, 2011 to September 23, 2012. The series was directed by Sgt. Frog’s Susumu Yamaguchi with character designs by Michinori Chiba and a mechanical design team consisting of Kanetake Ebikawa, Junya Ishigaki and Kenji Teraoka. AGE is a multigenerational series divided into four arcs following three generations of Gundam pilots from the Asuno family and their roles in the decades-spanning war with the Mars-dwelling Vagans.

Next Gundam Trilogy, Reconguista in G Movies, and More Streaming for Free during Gundam Online Expo 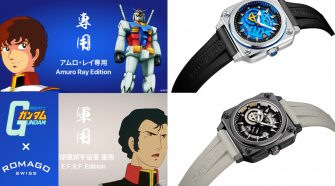