Bandai Namco Arts, the anime/music production and distribution subsidiary of Bandai Namco Group, have announced they will be releasing a Blu-ray box set to celebrate the tenth anniversary of the Mobile Suit Gundam AGE series. Priced at 44,000 yen, the box set will release February 25, 2022.

The box set will include:

Conceptualized and scripted by game developer, President and CEO of Level-5, Akihiro Hino, Mobile Suit Gundam AGE aired from October 9, 2011 to September 23, 2012. The series was directed by Sgt. Frog’s Susumu Yamaguchi with character designs by Michinori Chiba and a mechanical design team consisting of Kanetake Ebikawa, Junya Ishigaki and Kenji Teraoka. AGE is a multigenerational series divided into four arcs following three generations of Gundam pilots from the Asuno family and their roles in the decades-spanning war with the Mars-dwelling Vagans. 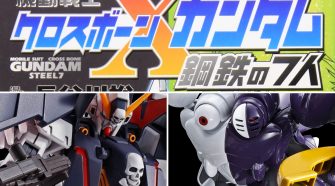