The dream collaboration was born from Gundam actors Toru Furuya and Shuichi Ikeda who portray Legendary rivals Amuro Ray and Char Aznable, also having roles in the Detective Conan series as Rei Furuya and Shuichi Akai, respectively. In the context of Hathaway’s Flash, protagonist Hathaway Noa is considered the successor to Amuro’s and Char’s ideals

The cross-promotion will include a crossover key visual that will be displayed in theaters nationwide in Japan. And Bandai Spirits will be releasing an ENTRY GRADE Conan Edogawa (MS-06S Zaku II color) & HG 1/144 MS-06S Zaku II (Shuichi Akai color) model kit set priced at 3,300 yen. The set will be released June 21 at The Gundam Base facilities and satellite stores, as well as Premium Bandai.

Detective Conan: The Scarlet Bullet is the 24th anime film installment in the long-running franchise. The Chika Nagaoka-directed film opened in April 16, 2021 amassing a hefty cumulative total of 6,777,862,250 yen with over 4.83 million tickets sold.

While the film is screening in Japan, last Thursday, streaming giant Netflix announced they were exclusively releasing the Hathaway film internationally July 1, 2021, during their “Geeked Week” event 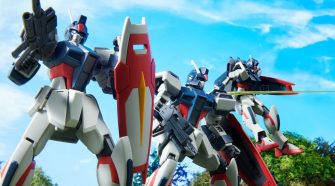