The official Sunrise Gundam portal website Gundam Info recently held a poll in their “Gundam Census” series asking netizens which Gundam topic for 2022 they were most interested in.

With 1,347 total votes, Mobile Suit Gundam the Witch from Mercury topped the poll with 39.9%.

Announced during the “2nd Gundam Conference” on September 15 by the Bandai-Namco Group, Mobile Suit Gundam the Witch from Mercury is the highly anticipated first new Gundam TV anime series in seven series, since the broadcast of Mobile Suit Gundam Iron-Blooded Orphans. The series is currently shrouded in mystery as far as plot or staff, but is stated to focus on attracting teenagers. Bandai-Namco Group will be working with external “G-PARTNER” members on the series to aim for “large-scale deployment than ever before”. The series is set to release this year in 2022.

Mobile Suit Gundam Iron-Blooded Orphans G comes in at 2nd place with 19.4% of the poll.

With 13.6% of the votes, Mobile Suit Gundam: Cucuruz Doan’s Island is the third place winner in the poll.

In the original series, the episode depicts protagonist Amuro Ray meeting Principality of Zeon deserter Cucuruz Doan. Stricken with guilt over his actions in a past battle involving killing civilians, Doan has secluded himself on an island taking care of war orphans.

In fourth place with 13.3% of the votes is the life-sized RX-93ff Nu Gundam statue.

The statue reached near completion in December and a jotoshiki(roof-laying ceremony), or “head raising ceremony” was held December 22, in which the mobile suit’s head was blessed by a Shinto priest before being hoisted with a crane and attached to the Gundam’s body. 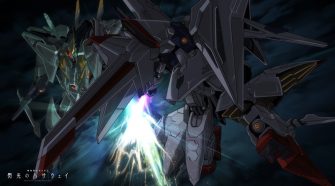