Designed by legendary mechanical designer Kunio Okawara, the TMF/A-802 BuCUE is a beast-like quadrupedal, ground-assault mobile suit fielded by ZAFT in the Mobile Suit Gundam SEED series. Compared to the conventional bipedal models among ZAFT’s forces, it boasts superior mobility. The BuCUEs were famously introduced in SEED as the preferred unit of North African commander “Desert Tiger” Andrew Waltfeld. Waltfeld himself piloted a custom BuCUE, that appeared in the Mobile Suit Gundam SEED MSV, which would eventually be developed into his signature orange-hued TMF/A-803 LaGOWE. 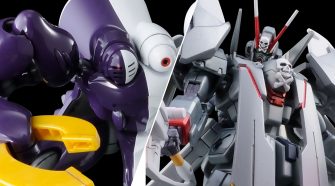