The Union, AEU, and Human Reform League have formed the United Nations forces. Their mobile suits with pseudo solar reactors threaten the Gundam. Setsuna and the others repelled their attack, but only after great sacrifice. The battle has entered a new phase. The entire world has joined forces to overthrow the Gundam.
Is this Aeolia’s plan to help Celestial Being defeat their foes?

The CG anime project was announced March 2022 during the Tamashii Nations’s “Gundam Figures LIVE” event attended by Mobile Suit Gundam 00 director Seiji Mizushima. Revealed Chronicle is a collaboration project with Tamashii Nations’s “Metal Build” figure line and will feature previously unrevealed anecdotes about how design data from the product development phase was used in the anime series. While not a full anime project, Revealed Chronicle will fill in gaps in-between 00’s first and second seasons. The project was said to unveil the secrets of the Double Drive, the missing link to the GN Drive, and feature new mobile suits for Setsuna F.Seiei, Lockon Stratos and other characters.

Featured in the new episode, Tamashii Nations will be releasing the Metal Build GN Arms TYPE-E in June 2023 priced at 58,300 yen. 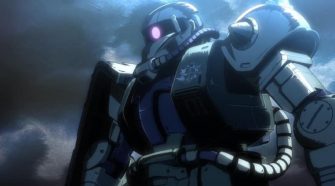