Dubbed “Winter Illumination 22-23 ver.”, the winter lighting event will commence from December 4 to February 2023. A “WINTER TREE” objet d’art based on the RX-93ff will sit at the foot at the statue, adorned with a tree topper of Amuro Ray’s personal mark, and a wreath with the RX-93ff’s V-fin as a motif.

From December 5 to January 9, 2023, a “Garapon lottery challenge” will be held for visitors who spend 950 yen or more at Gundam Park Fukuoka, located on the fourth floor of the LaLaport FUKUOKA shopping center.
The prize includes merchandise autographed by Kana Ichinose, who portrays  protagonist Suletta Mercury in Mobile Suit Gundam the Witch from Mercury, original limited edition stickers, and a pair of tickets to “VS PARK WITH G”. Various other events are planned and will be announced at a later date.

Earlier in the month, Gundam Factory Yokohama, which hosts the moving RX78F00 Gundam statue, announced its “GFY Winter Illumination 2022″  the Witch from Mercury-themed event, running from November 24 to January 9, 2023. The series opening theme song “The Blessing” by YOASOBI used as music to liven the performance and unique winter laser light effects.

Similarly, from December 2 to February 19, 2023 the RX-0 Unicorn Gundam statue at DiverCity Tokyo Plaza will be illuminated with colors based on the Witch from Mercury, as well as a statue sitting at the foot of the transforming mobile suit, featuring protagonist Suletta Mercury, Miorine Rembran, and lead mobile suit XVX-016 Gundam Aerial.

Based on Amuro Ray’s RX-93 Nu Gundam from the 1988 Mobile Suit Gundam: Char’s Counterattack film, originally designed by Yutaka Izubuchi, the RX-93ff version sports a new long-range Fin Funnel and tricolor markings designed under the supervision of Gundam creator Yoshiyuki Tomino. The RX-93ff is touted as being the tallest of the four Gundam statues at 24.8m. 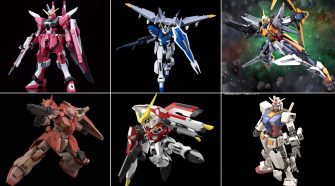