Meanwhile, the prequel episode will stream in Japan across various digital platforms such as Bandai Channel, Gundam Fanclub, Hulu, ABEMA, U-NEXT, and d Anime Store beginning September 4 at 18:00 JST. Initially, the PROLOGUE was exclusively seen at the July 14 and July 15 at the GUNDAM NEXT FUTURE -LINK THE UNIVERSE multi-venue event and July 21 at San Diego Comic Con 2022.

The official Mobile Suit Gundam: the Witch from Mercury Twitter account has also teased an announcement for September 4 at 17:30 JST.

At Fólkvangr, a front constructed inside an asteroid,
the Gundam Lfrith is undergoing operating tests in the Vanadis Institute’s laboratory.
The Lfrith has not yet managed to meet the conditions imposed by the council,
and test pilot Elnora Samaya is growing impatient.
That same day, her daughter is celebrating her fourth birthday…

Gundam: the Witch from Mercury is directed by Kiznaiver‘s Hiroshi Koyabashi, and penned by Code Geass scribe, Ichiro Ohkouchi. The tagline of the series is “This witch…rides a Gundam”. The series will broadcast this fall in October 2022 on twenty-eight of MBS and TBS TV networks on their 5pm “Nichigo” anime block, as well as simulcasted internationally.

Next Gundam the Witch from Mercury Releases New Trailer, Announces Cast and Theme Song by YOASOBI 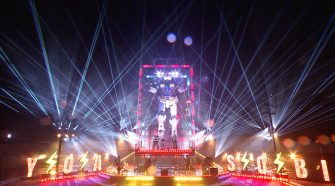