After a week of teasing from the official Mobile Suit Gundam the Witch from Mercury Twitter account, the next batch of information has been released for the upcoming series. Along with a new trailer and key visual, we learn the series premiere date will be October 2, additional casting, and Japanese superduo YOASOBI will be performing the opening theme song “Shukufuku”(“The Blessing”), as featured in the trailer.

Two new characters have been revealed for the series, Nika Nanaura and Chuatury Panlunch.
Nika is portrayed by Yume Miyamoto(Rikka Takarada in SSSS.Gridman) and is described as a second-year student in the mechanical department, who belongs to Earth House. She loves mecha, and is very curious about Suletta’s Gundam Aerial. Nika has outstanding maintenance skills, and is proud of herself for customizing Chuchu’s Demi Trainer.

Chuatury is a first-year student in the piloting department, who belongs to Earth House. She is nicknamed “Chuchu.” She hates the Spacians who discriminate against Earthians, and often gets into fights. Chuchu pilots a unique restored older-generation Demi Trainer. She is portrayed by Miyu Tomita( Riko in Made in Abyss).

Yohei Azakami(Kennosuke from Kuromukuro) will portray Guel Jeturk, an heir to Jeturk Heavy Machinery, one of the group’s three branches, and a third-year student in the piloting department. Guel has a rough temperament and is quick to anger. As the ace pilot of Jeturk House, he has absolute confidence in his own skills.

Natsuki Hanae(Tanjiro Kamado in Demon Slayer: Kimetsu no Yaiba, Ken Kaneki in Tokyo Ghoul, Biscuit Griffon from Mobiile Suit Gundam: Iron-Blooded Orphans, Shinpei Ajiro in Summertime Rendering) portrays Elan Ceres. Elan pilots the Gundam Pharact and is the top pilot backed by Peil Technologies, one of the group’s three branches. A third-year student in the piloting department. Elan is a taciturn and solitary person, who doesn’t open his heart to anyone in school. He has an interest to Suletta.

Makoto Furukawa(Saitama in One-Punch Man) plays Shaddiq Zenelli, an adopted child of the CEO of Grassley Defense Systems, one of the group’s three branches. A third-year student in the piloting department who leads Grassley House. Shaddiq is a smooth-talking ladies’ man with a carefree manner. Although still a student Shaddiq has shown his skill in business too, he is a candidate for next generation executive. Shaddiq pilots the Michaelis.

Previous Gundam: the Witch from Mercury PROLOGUE is Now Streaming 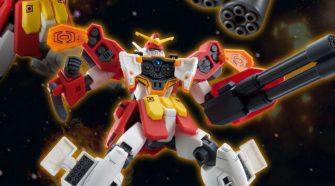