With the release of Hiroko Moriguchi’s third Gundam Song Covers album, the Gundam songstress has posted a video compilation with the samples of each track, as well behind the scenes footage of the recordings and music video content.

The songstress’s album series has been successful, selling over 200,000 copies with the first Gundam Song Covers awarding Moriguchi the “Planning Prize” at the 61st Japan Record Award and featured in Oricon’s album rankings for daily 2nd place and weekly 3rd place.

Continuing with the theme of the last two albums in the series, this third album will feature Moriguchi collaborating with a variety of artists producing unique renditions of the classic Gundam songs.

– GUNDAM SONG COVERS Series Complete box. A storage box that can hold all three albums with an original illustration by Tsukasa Kotobuki of Hiroko Moriguchi riding in a core fighter.

– A4 size clear file of the illustration by Tsukasa Kotobuki 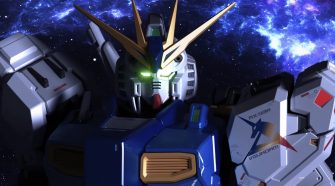