Earlier today Japanese super duo YOASOBI performed their hit single, “The Blessing”, serving as the opening theme song for Mobile Suit Gundam the Witch from Mercury, at Gundam Factory Yokohama with the moving RX-78F00 Gundam statue. The duo posted a video of the performance on their official YouTube channel.

Early November, Gundam Factory Yokohama announced its “GFY Winter Illumination 2022″ event. This winter show is themed after the current Gundam TV installment, Mobile Suit Gundam the Witch from Mercury. From November 24 to January 9, 2023 attendees will be able to see the moving Gundam perform new poses related to the Witch from Mercury, with the series opening theme song “The Blessing” used as music to liven the performance and unique winter laser light effects.

In September it was announced YOASOBI would be performing the opening theme song for the Mobile Suit Gundam the Witch from Mercury TV anime, titled “Shukufuku” or “The Blessing”. The song was accompanied by an original novel named “Cradle Planet”, authored by the series head writer Ichiro Ohkouchi.
The tune has become quite the bop, topping the charts on iTunes Japan, trending on Twitter, entering Billboard‘s Global Top 200, charting as #76 behind “Talk That Talk” by the K-pop band TWICE. YOASOBI released an official anime music video for the song on October 2, which has since garnered 17 million views. 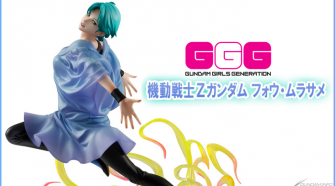