“Led by a mission into a chance meeting. One with a closed heart due to his past. One a wounded soul who can’t move forward. One struggling between ideal and reality. One seeking her own purpose. Each with their own yearnings, they face a battle for their lives.”

The Gundam Build series, from Gundam Build Fighters to Gundam Build Divers, is intended to be a lighthearted spin-off Gundam franchise with a direct emphasis on model kit building in lieu of the sociopolitical intrigue and war drama accustomed to the Gundam metaseries. The Re:RISE series begins by distinguishing itself from the previous Build incarnations with a noticeably more serious tone, and an emotionally distant, loner protagonist in Hiroto Kuga as opposed to the friendly, upbeat, and optimistic traits in Sei Iori, Sekai Kamiki, and Riku Mikami. 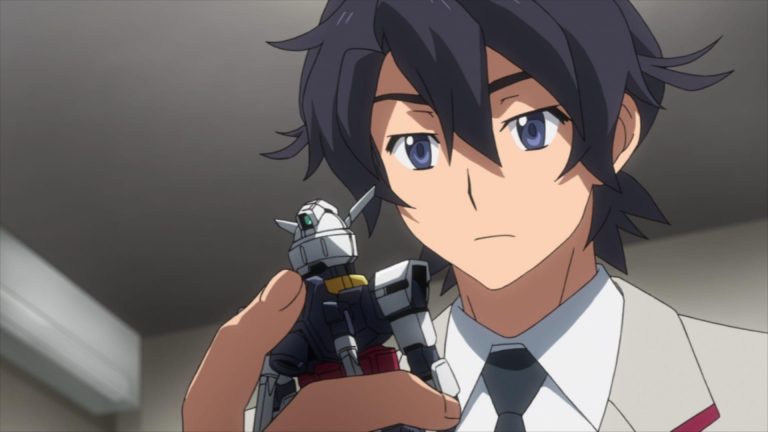 The series serves as a sequel to the 2018 Gundam Build Divers following a new group of GBN(Gunpla Battle Nexus Online) players(or divers) haphazardly forming a party and taking up the mantle of “BUILD DiVERS” to participate in what’s assumed as another “story mission” game event on the distant planet of “Eldora”, inhabited by a race of dog-like humanoids. The team consists of Hiroto, the over confident Kazami, the meek newcomer Parviz, and the stoic EL(Electronic-Lifeform) Diver May. While not part of the “team”(initially), Hinata Mukai serves as the concerned friend and confidante to Hiroto. Throughout the series Hinata has her own parallel story trying to support Hiroto emotionally and training in her Kyudo Club. The Build Divers’ main goal is to protect the villagers from the “One Eyes”, a mysterious group of mobile suits hunting the inhabitants for no apparent reason.

While the first season trails at snail’s pace with little plot development, focusing more on overcoming their poor team dynamics and strategizing in a “battle of the week” format, there are nuggets of great character development that sow the seeds for greater revelations later in the series. These take the form of Hiroto’s recurring flashbacks to a tragic incident involving his close friend Eve, Kazami’s hero complex, Parviz’s yearning to fly and overcoming his own timidity, and May’s longing for purpose or her “mission”.

Something is “off” about this mission, the “NPDs” seem too real, their dialogue is too natural. The series takes a dark turn towards the end of the season as the mission goes awry. The Build Divers confront who appears to be the “Final Boss”, Alus, a rogue planetary defense system creating and controlling the “One Eyes”, who has deemed the current Eldoran populace as foreign invaders. Unable to stop Alus in time, its orbital cannon destroys the Eldoran cultural center and holy city of Seguri, resulting in mass death and destruction across the planet. As the remaining Eldoran villagers mourn, this tragic event causes an gravitational pulse in the real world disrupting the world’s communications. News outlets report the disturbance originated from a planet 30 light years away presumably Eldora.

The Build Divers meet in person for the first time to discuss the aftermath of the event and visit a comatose patient named Masaki Shido, a former top GBN diver, who is revealed to be the pilot of the fearsome Gundam Seltsam controlled by Alus.
They come to the shocking conclusion their Eldoran experiences were in fact real, they were no longer just playing a game. The season finale episode “Somewhere in This Universe” marks a status quo change for the series as the team reacts to these depressing revelations and laments returning to Eldora.

Season two of the series ramps up the story with less battle focused episodes and more dedicated to exposition, world building and character development. In typical fantasy fashion, the sacred beast Cuadorn explains the origins of Eldora and Alus to the Divers. We learn Parviz was an aspiring aviator in the real world but becomes a paraplegic after a flying accident, justifying his yearning to fly. Kazami continues to learn he must shake off his own ego to be the true hero he desires.

Episode 20: “A Wish Entrusted” could be described as the emotional climax of the series as we see Hiroto finally break down his emotional walls and the very traumatic incident regarding Eve is unveiled. May consoling Hiroto feels poetic as they’re both emotionally distant, trying to find their purpose throughout the series; a sort of tenderness and connection May hasn’t expressed towards anyone else in the series.

The series finale “Re:Rise” features the standard massive final battle but also serves to round off May’s character arc and develop the nature of the EL Divers first introduced in Gundam Build Divers. As Alus is destroyed and reborn as an infant EL Diver, it’s heavily implied the EL Divers are actually the remnant data of the Ancient Eldorans. This offers some much needed clarity for May and rationalizes her empathy towards Alus.

The previous Gundam Build entries had their fair share of drama and dilemmas, such as Aila Jyrkiäinen being abused by the Flana Institute in Gundam Build Fighters(a direct reference to the infamous Flanagan Institute from Mobile Suit Gundam 0079) and the ideological conflict regarding Sarah’s existence at the tail end of Gundam Build Divers. However, the main focuses of the aforementioned series, including Gundam Build Fighters Try, were generally issues involving Gunpla battling such as overcoming rivals, winning a tournament, clearing a game mission or improving one’s Gunpla. While these series are quite enjoyable and appreciated for what they are, they lack the depth and gravitas presented in Re:RISE, which could be directly attributed to Yasuyuki Muto’s script supervision.

While not quite the level of seriousness present in mainline Gundam entries, be it Universal Century works or “Alternate Universe” series like Mobile Suit Gundam 00, Gundam Build Divers Re:RISE was quite the refreshing departure from what is usually offered from the Gunpla centric Gundam Build series with its own set of high stakes. Re:RISE feels like an intentional tonal shift from the fluffy, yet charming  Gundam Build Divers. Divers spent the majority of the series exploring the fun of GBN, whereas Re:RISE acts as a complementary juxtaposition expounding on the Divers concept . With Gundam Build Divers Re:RISE concluding, it’s exciting to see where the Build series will steer next or if Sunrise will make a return to the Alternate Universes. 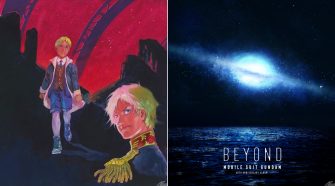