The 1994 Mobile Fighter G Gundam series depicts the first major Gundam entry not set within the franchise’s long running Universal Century timeline.  As the franchise was nearing its 15th anniversary, a pressing issue at the time was the aim to appeal to younger demographics; first attempted with the 1993 Mobile Suit Victory Gundam by making Uso Ewin a younger Gundam protagonist at the age of 13. G Gundam would distinguish itself by stepping away from the war drama thematics that defined the franchise and incorporate martial arts elements that were popular with children at the time with works such as Dragonball Z and Street Fighter II. Garnering a reputation for making series move in unexpected directions from Mister Ajikko and Giant Robo: The Day the Earth Stood Still, Yasuhiro Imagawa joined the Gundam project as director. Veteran Fuyunori Gobu, of Armored Trooper Votoms fame, was brought on for series composition.

Mangaka Kazuhiko Shimamoto(Blazing Transfer Student, Blue Blazes) was tapped for character design drafts for the series by producer Masahiko Minami, who had been a friend and classmate to Shimamoto at Osaka University of Arts. The final character designs were handled by Hiroshi Osaka(The Vision of Escaflowne) coming off Victory Gundam.

“G Gundam stood out as a series that stressed the pursuit of fun . . . The reason that it remains so popular to this day, in spite of it being such an unusual show, might be because it had a power that went beyond it being merely ‘unusual’- it had the power to show what a Gundam series could be.” 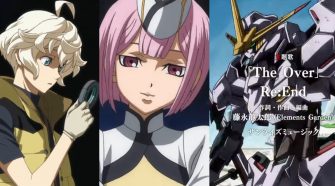