“Breaking Blazing” is now available for digital purchase through music services such as Apple Music, YouTube Music, Spotify, and iTunes. The song’s lyrics were written by the band’s vocalist Megatera Zero, composed by Nanahoshi Kangengakudan, with arrangement by Mr.FanTastiC.

The anime series features characters from Gundam Breaker 3 and Gundam Breaker Mobile, and will stream every Tuesday beginning October 19, 2021 at 21:30 JST on Gundam Info internationally and Gundam Channel in Japan. Episode 1 “First Contact” is now available.

After intense fighting, the GUNPLA Battle U.S. Championship enters its final round. Here, the figure of a certain fighter appears.
A few months later Misa Satsukino, building a new GUNPLA in the Ayato Shopping Street, seems to be in a worse mood than usual. As an outlet for her unfocused anger, she sets her completed GUNPLA in a simulator and enters battle, but the GUNPLA is suddenly restrained.
On the eve of the huge GB Festa event, the fates of the GUNPLA Fighters are at a critical juncture. 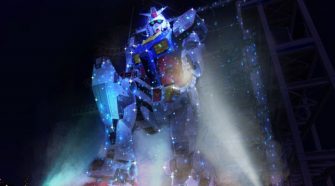