Wednesday, Bandai Namco Holdings released their financial highlights of the fiscal year, which ended on March 31, 2022. The conglomerate reported that the Mobile Suit Gundam franchise earned 101.7 billion yen across the group’s subsidiaries, a first for the iconic mecha franchise, now comprising more than 10% of sales for Bandai Namco.

Announced during the 2nd Gundam Conference on September 2021 were two major anime installments planned for a 2022 release. Mobile Suit Gundam: Cucuruz Doan’s Island is a new anime film directed by Yoshikazu Yasuhiko, and Mobile Suit Gundam: The Witch from Mercury is the first new Gundam TV anime in seven years.

Bandai Spirits, toy and hobby subsidiary of Bandai Namco Holdings, announced in a press release on April 28, 2022, that the company will be constructing a new factory for the Bandai Hobby Center to meet the increased demand for its widely popular Gundam plastic model kits (Gunpla) in Japan and overseas.

The Bandai Namco Group aims to expand its global business, and proactively promotes worldwide development of visual content, products and services for the Gundam series. As a result, the popularity of plastic model kits, such as Gunpla, has increased around the world. Thus far, BHC has carried out expansion with a new building (commenced operation in December 2020) and initiatives to improve production efficiency as well as reinforcing production functions based on cooperation with Group subsidiaries and business partners. To be able to respond to fans’ expectations going forward, BANDAI SPIRITS CO., LTD. has acquired the land adjacent to it and will construct a new factory with the aim of securing an even more stable production system. The Bandai Namco Group will continue to work to improve the production system from a variety of directions.

In the 42 years since its introduction in July 1980, coupled with the popularity of the Gundam series, Gunpla have become a worldwide phenomenon, selling over 700 million units. The official Gunpla flagship store, The Gundam Base, has a total of 16 locations worldwide in Japan, South Korea, Taiwan, China and Thailand.

The original 1979 Mobile Suit Gundam series was produced by anime studio Sunrise in collaboration with Gundam’s director Yoshiyuki Tomino, animator Yoshikazu Yasuhiko, and mechanical designer Kunio Okawara. Under the stewardship of Sunrise and Bandai Namco, Gundam has become one of the most recognizable Japanese brands worldwide with its myriad of anime installments, breathtaking animation quality, rich storytelling and thematics, games, manga, novels, and model kit empire. 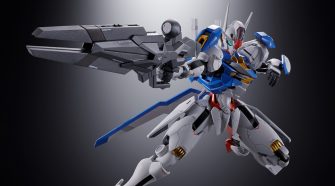