Gundam Info, the official Gundam YouTube channel for international audiences, is now streaming both seasons of Mobile Suit Gundam 00, episodes 1-50. The series will be available for three months from June 17, 2021 to September 16, 2021. The series streams with Japanese audio and English, Chinese(Taiwan), Chinese(Hong Kong), and Korean subtitle options.

A stage play adaptation of the anime series, Mobile Suit Gundam 00- Awakening By Destruction-, debuted in February 2019, with Fumiya Matsuzaki as director and playwright, and 00’s anime director Seiji Mizushima supervising the production. A sequel was set to be performed in July 2020 but has been delayed by COVID-19 to 2022. 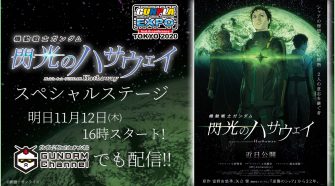