The song is performed by singer Benjamin and was featured during the second act of the Mobile Suit Gundam Hathaway’s Flash anime film, as Mafty members begin their night raid on Davao City, Philippines.

Hathaway’s Flash in its first week sold a total of 53,674 Blu-ray copies at 215 theaters, including 34,222 copies for the limited edition and 19,452 copies for the regular edition. The Blu-ray sales have far surpassed the 6,772 copies of Mobile Suit Gundam The ORIGIN: VI Rise of the Red Comet in 2018 and the 19,998 copies of Mobile Suit Gundam Unicorn episode 7 Over the Rainbow in 2014. 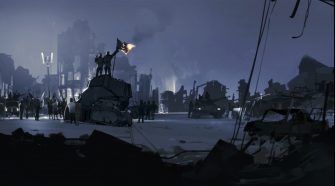