The Gundam Base Tokyo opened in 2017, replacing Gundam Front Tokyo at Diver City Tokyo Plaza in Odaiba, Tokyo as Bandai’s premier Gundam plastic model store in Japan. The next major Japanese location in The Gundam Base store chain was The Gundam Base Fukuoka in 2019. To celebrate the venue’s fifth anniversary, they have announced a “5th Anniversary Project” that will include special decorations inside the stores, mainly at the Tokyo location, as well as an exhibition of works by famous Gunpla modelers and a display of The Gundam Base limited edition items from the past five years.

The Gundam Base Tokyo and Fukuoka locations will also be hosting “Mobile Suit Gundam: Iron-Blooded Orphans World”. Beginning March 26, the attraction will feature:

During the event The Gundam Base Tokyo and Fukuoka will be selling limited edition “Iron-Blood Coating” versions of the HG 1/144 Gundam Hajiroboshi and HG 1/144 Gundam Marchosias, priced at 4,180 yen and 5,280 yen respectively.

The special edition totals nine episodes and is described as a “digest” version of the series, set to premiere on the MBS, Tokyo MX, and BS11 Japanese TV stations starting April 5, 2022.

Produced by Sunrise BEYOND, Urðr-Hunt takes place between seasons one and two of the Iron-Blooded Orphans series, set on the Venus colony of Radonista, following protagonist Wistario Afam piloting the mysterious Gundam Hajiroboshi. Urðr-Hunt will see staff members from the original series such as Tatsuyuki Nagai and Masaru Yokoyama returning to their roles for the spin-off game. 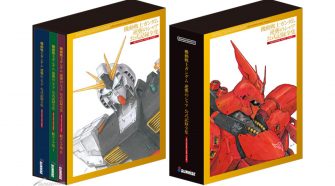