Anime production studio Sunrise is gearing up for the premiere of their upcoming theatrical Gundam film, Mobile Suit Gundam: Cucuruz Doan’s Island. For the fan celebrated “Zaku Day” the official website for the film has announced the casting for the titular Cucuruz Doan character. Doan will be portrayed by Shunsuke Takeuchi, who also portrays Iram Masam in the Mobile Suit Gundam: Hathaway’s Flash anime film. Takeuchi is best known for his other roles such as the Producer in THE IDOLM@STER CINDERELLA GIRLS, Revolver in Yu-Gi-Oh VRAINS, Juuza Hyoudo in A3!, and Brawler in Akudama Drive.

Takeuchi commented about his casting in the film, “I feel very honored to be involved in the Gundam series at this time, which has just passed its 40th anniversary, and to be a part of the ‘first series’ directed by Yasuhiko-san.”

Cucuruz Doan is described as:

A former Principality of Zeon MS pilot who lives on an isolated island with his many children and dairy animals. He became a deserter after running away with the Zaku he was piloting, and has been fighting both the Earth Federation and Principality of Zeon forces approaching the island with the Zaku he has been repairing and refurbishing, disabling enemy machines. He rescued Amuro from the cockpit after engaging with his Gundam who visited the island to mop up the island’s Zeon remnants. He is a skilled pilot, capable of overpowering even the Gundam piloted by Amuro, who is becoming an experienced warrior. He is hiding a certain secret of the island from his former subordinates, the Southern Cross Corps. He is marked for death. 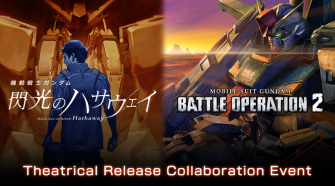