Cucuruz Doan’s Island is a recent anime film directed by Yoshikazu Yasuhiko, the character designer and chief animation director of the original 1979 Mobile Suit Gundam series, as well as chief director of the 2015-2018 Mobile Suit Gundam: The Origin series. The film is a remake and new perspective on the fifteenth episode of the same name from the original series. Since its release on June 3, 2022, the film has grossed 1.08 billion yen with 550,000 attendees.

The model kit includes newly sculpted backpacks for Kai and Hayato’s respective versions of the Guncannon. The enhanced mobility of the HG format allows for impressive poses of the Guncannon, such as lying on the ground and shooting cannons, or mid-back launching poses. The coloring of the Cucuruz Doan’s Island version for the Guncannon is executed by color molds, with all of the details of the unit faithfully recreated from the anime film.

Next TV Editions of Gundam: Hathaway's Flash, NT, and Thunderbolt to Air January to March 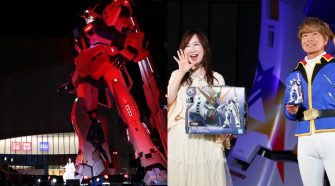