Beginning in 2010, Mobile Suit Gundam Unicorn adapts the bestselling novel of the same name into a seven-part anime series directed by Kazuhiro Furuhashi, scripted by Yasuyuki Muto, with a music score composed by the renowned Hiroyuki Sawano. The novel was published by Kadokawa Shoten from 2007 to 2009, penned by Harutoshi Fukui with character designs by celebrated animator Yoshikazu Yasuhiko and mechanical designs by Hajime Katoki.

Set in Universal Century 0096, three years after Mobile Suit Gundam Char’s Counterattack(1988), the tentative peace of the Earth Sphere is about to be shattered again. Cardeas Vist, the head of the powerful Vist Foundation, has decided to hand over “Laplace’s Box,” the source of the Foundation’s prosperity, to the supposed enemy, Neo Zeon, that is said to unveil a deep secret of the Earth Federation. Banagher Links, a student at the space colony Industrial 7, rescues a mysterious girl who calls herself Audrey Burne. Audrey is seeking to prevent a war, but it seems she has come too late. As Banagher’s home colony is devastated by the attacks of the enemy mobile suit Kshatriya, he finds his destiny woven into this conflict and is forced to fight with the new formidable RX-0 Unicorn Gundam.

The Unicorn series proved to be a massive success for anime studio Sunrise and the Bandai Namco Group, with rave reviews, strong home video sales and an abundant model kit line. In 2017, an 1:1 scale transforming RX-0 Unicorn Gundam statue was erected in Odaiba at DiverCity Tokyo Plaza becoming a popular tourist attraction and local cultural landmark.

Official Synopsis:
U.C. 0097, one year after the opening of “Laplace’s Box.” Despite the revelation of the Universal Century Charter that acknowledges the existence and rights of Newtypes, the framework of the world has not been greatly altered. The conflict later dubbed the “Laplace Incident” is thought to have ended with the downfall of the Neo Zeon remnants known as the Sleeves. In its final battle, two full psycho-frame mobile suits displayed power beyond human understanding. The white unicorn and the black lion were sealed away to remove this danger from people’s consciousness, and they should now be completely forgotten. However, the RX-0 Unicorn Gundam 03, which disappeared two years earlier, is now about to show itself in the Earth Sphere once more. A golden phoenix… named Phenex 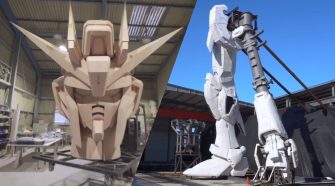