Anime studio Sunrise recently announced in a press release it would be relocating its headquarters to a new office consolidating its multitude of production studios and subsidiaries into one building. Sunrise hopes to foster easier communication between its divisions with this new move.

The company will remain in Suginama, Tokyo and its new headquarters will be aptly named “White Base”, after the iconic Pegasus-class space vessel from the original 1979 Mobile Suit Gundam anime that served as the “home” for the main characters of the series. Included in the press release were a few images of their new office, with decor featuring legendary Gundam rival Char Aznable, and Honoka Kosaka from Love Live!.

Sunrise Music and Sunrise‘s IP corporate headquarters, management head office, and business auditing room will be the first to begin operations at the new location starting October 25, 2021. Sunrise‘s plethora of animation studios and other subsidiary companies will follow starting November 1 through 2022.

Sunrise is one of the most prolific and largest anime studios in the industry. The animation juggernaut is best known for its revolutionary “mecha anime” and spearheading the massive Gundam franchise. The original 1979 Mobile Suit Gundam anime series was made in collaboration with Gundam’s director Yoshiyuki Tomino, animator Yoshikazu Yasuhiko, and mechanical designer Kunio Okawara. Partnered with Bandai Namco, Gundam has since become one of the most recognizable Japanese brands worldwide with its myriad of entries, rich storytelling and thematics, breathtaking animation, and model kit empire. 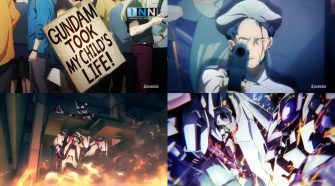