Toy/figure company MegaHouse has announced the release of the latest additions to their articulated Gundam figure line, Gundam Military Generation, Ramba Ral and Crowley Hamon from the Mobile Suit Gundam series. The announcement was made during the company’s online event “Mega Hobby Expo 2021 Online”.

The G.M.G. Mobile Suit Gundam Principality of Zeon Army 07 Ramba Ral & Crowley Hamon presently does not have a price or release date.

First appearing in episode 12: “The Threat of Zeon” of the 1979 Mobile Suit Gundam series, Ramba Ral and Crowley Hamon are depicted as lovers within the Principality of Zeon forces sent to Earth to avenge the death of Garma Zabi by pursuing the White Base crew. Known as the “Blue Giant”, Ral became well known for his guerrilla tactics and use of blue mobile suits, including the iconic MS-07B Gouf.

The duo would return for the 2015 six-part Mobile Suit Gundam: THE ORIGIN OVA (original video animation) series. As THE ORIGIN details the events leading up to the One Year War, the pair are featured in more prominent roles.

Beginning serialization in November 2020, Ral’s Grub ~Ramba Ral’s Immoral Meals~ is a gourmet manga penned by Kazuya Tani. The manga depicts Ramba Ral tending to the Club Eden night club while the staff are away, and eating freely without anyone bothering him. Sanami Suzuki supervises the cooking and gourmet portions of the manga. 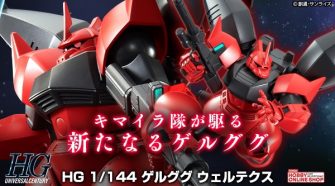