The Blu-ray Limited Edition is priced at 9,680 yen and will also include the Kuwana and Gyubou-drawn storage box/inner jacket art. The standard Blu-ray is priced at 7,840 yen and 6,380 yen for the DVD.

The director is currently retelling the series in the form of five compilation films. The film series was announced in November 2018 as a part of the Mobile Suit Gundam 40th Anniversary Project. The compilations were to include new scenes and newly recorded dialogue.

At Sankt Porto, the spaceships of the Amerian Army suddenly come under attack. The space colony nation of Towasanga has begun its “Reconguista” operation, whose goal is a return to Earth. As four powers from Earth and space gather at Sankt Porto, asserting their respective claims and fighting for their causes, Aida decides to head for Towasanga with Bellri and her comrades in order to seek the truth. In Towasanga, on the far side of the Moon, shocking facts will be revealed to Bellri and Aida… 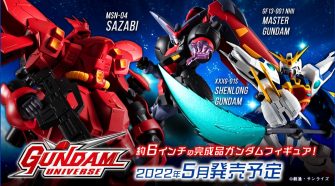