Last February Bandai Namco Holdings announced plans outlining their IP Axis strategy in which 15 billion yen(130 million USD) would be invested in the development of an “IP Metaverse” for their various IP, along with 25 billion yen(215 million USD) invested in maximizing IP value through new IP creation, Groupwide IP projects and open innovation.

The virtual community will be designed like a space colony in the vastness of virtual space, analogous to the Gundam universe, and will be connected to create a single “Gundam Metaverse” space named “SIDE-G.” The “Gundam Metaverse” will be created by connecting different communities or “colonies”.

The space colonies that make up “SIDE-G” will mainly consist of various categories such as anime, Gunpla, games, and music. The goal is to create a space that is not only a digital service, but also a fusion of digital and physical space that takes advantage of the strengths of the Bandai Namco Group.

The first step in the “Gundam Metaverse Project” is to launch the “Gunpla Colony,” a virtual space that will provide various experiences related to Gunpla. Gundam Base Virtual World is a space for virtual Gunpla-themed entertainment that can be enjoyed from anywhere in the world, which has been in test operations since 2021. The company will host a limited test this fall with the aim of officially entering service as “Gundam Base Gunpla Colony Store”.

A “My Room” function will also be implemented using Bandai Namco IDs to create a community through Gunpla creations, as well as “Gunpla Battles” where Gunpla can be scanned and battled, “Gunpla Contest”, online Gunpla courses, and more.

The next major area of “SIDE-G” is the “eSports colony,” which is currently still in development eyeing completion in 2023.
Gundam Evolution, which launches in 2022, along with Mobile Suit Gundam: Battle Operation 2, will be the first titles used to develop the “eSports colony” as a gaming community in which anyone in the world can participate.

In the near future, by using the Gundam Metaverse, Bandai Namco plans to license User Generated Content in Gundam and promote C to C business with the aim of encouraging the entry of companies outside the Bandai Namco Group into the Gundam business and providing a place where ordinary users can do business using Gundam. By building a metaverse where character rights are preserved and implementing this initiative, Bandai Namco expects that new Gundam businesses to be formed, leading to further expansion of the Gundam IP co-created with fans.

In addition, plans are underway for what will become the main colony of the “Gundam Metaverse,” according to Bandai Namco. They are developing technology to bring fans a world where anyone can pilot their own personal Mobile Suit, as depicted in the Gundam Build Divers anime, as quickly as possible.

Previous Gundam: The Witch from Mercury Prologue to Release this Summer; Unveils Teaser and Mobile Suits 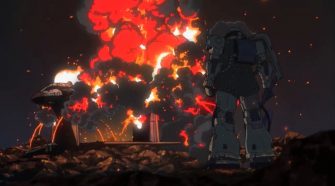