In conjunction with the upcoming Yoshikazu Yasuhiko/Mobile Suit Gundam: THE ORIGIN Exhibition, Kadokawa Media Factory is publishing an exhibition catalog featuring approximately five-thousand illustrations from the celebrated animator and director.

This book carefully selects from approximately 5,000 illustrations of “Mobile Suit Gundam: The Origin” by Yoshikazu Yasuhiko! Includes not only famous scenes, but also previously unpublished works and newly drawn illustrations.

Announced in 2014 to celebrate the 35th anniversary of the Gundam series, Mobile Suit Gundam: THE ORIGIN adapted Yoshikazu Yasuhiko’s manga of the same name into a six-part OVA series. Released from 2015 to 2018, THE ORIGIN details the events leading up to the One Year War and the origin of Casval Rem Deikun, who would go on to become the legendary rival and Zeon figure Char Aznable.

Yoshikazu Yasuhiko was announced last September to return to the Gundam series to direct a new anime film titled Mobile Suit Gundam Cucuruz Doan’s Island, giving a new perspective on the fifteenth episode of the same name from the 0079 series, releasing to theaters in 2022.

Next Bancolle! to Release Mafty Jacket from Gundam Hathaway’s Flash in March 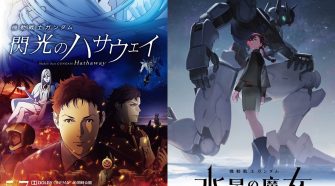