The Unicorn series opened with a flashback to UC 0001, depicting the beginning of the Universal Century era and the establishment of a united Earth Federation government. The ceremony at Prime Minister Ricardo Marcenas’s residence, Laplace, was tragically attacked by terrorists, kicking off the events that would eventually lead to the heavily sought after “Laplace’s Box.”

Next Gundam: The Witch from Mercury Releases 3rd Set of Smartphone Wallpapers 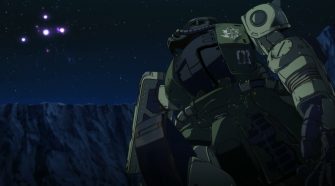