Heavy Metal L-Gaim released in 1984 and was directed by Yoshiyuki Tomino, best known at the time as the creator of Mobile Suit Gundam and a plethora of other Sunrise-produced Mecha anime works such as Space Runaway Ideon and Combat Mecha Xabungle. Famed designer Mamoru Nagano served as character designer and mechanical designer on the series. The fifty-four episode series would inspire a three episode OVA and Nagano’s later work Five Star Stories

In the Pentagona System, a young man by the name of Daba Myroad leads a rebellion against Pentagona’s leader, Oldna Poseidal. Daba’s not alone however, meeting a large number of allies along his journey and having in his possession the powerful L-Gaim, a white Heavy Metal left to him by his father.

Gaw Ha Leccee is one of the main heroines in L-Gaim, portrayed by Maria Kawamura, who starred as Quess Paraya in Mobile Suit Gundam: Char’s Counterattack, and Beltorchika Irma in Mobile Suit Zeta Gundam. Leccee is initially one of the Elite 13 in Oldna Poseidal’s army, she falls in love with Daba, then defects to join him in his crusade against Poseidal.

The figure is approximately 200mm and depicts Leccee in her black attire that she wears in the second half of the series, painted with a glossy pearl finish. Leccee sits on a translucent pink pedestal designed based on the logo of the series, while talking with the fairy Lilith Fau(also played by Kawamura in the work). Leccee’s face in the figure has been meticulously sculpted giving her a gentle, peaceful expression, which is normally so determined. 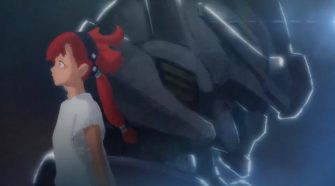