Finally, the first installment of the latest Gundam series in the Universal Century has begun. As the first film in a trilogy, the story is surprisingly centered on human drama. Many of the mobile suit depictions are casual, but each one makes me grin. And the Gundam VS Gundam battle after the middle act raises the tension. I can’t help but think of the ending of the novel, but there are some scenes that are unique to the movie, and I’m really looking forward to seeing how it ends. There’s Eva, but as a robot anime, Gundam cannot be forgotten.

A preview of the Hathaway film was screened earlier in April garnering similar praise. Anime and Capcom designer Akira Yasuda spoke in a Tweet, “I have high expectations for this one!”, Sugizo of LUNASEA noted the film having “an overwhelming quality that Japan is proud to present to the world”, “tomitac4” of the book editing and production company Megalomania praised the film’s cinematography with “There’s depth all over the screen, like you’re watching a live action movie!”. 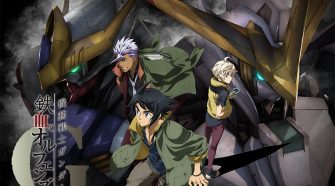