During the fascinating interview, Yasuhiko recounts the conception of Mobile Suit Gundam: The Origin as an idea by anime studio Sunrise to reimagine the aged 1979 Mobile Suit Gundam as a manga series to appeal to the international and US markets and his reluctance to spearhead the project.

“My initial reaction to the request to reboot Mobile Suit Gundam as a manga was quite an unpleasant one. Sunrise was very keen on this idea, so they kept on coming back to me repeatedly about it. I told them I didn’t care about bringing Gundam to the US or any of the money they were offering. At the same time, I did feel a degree of responsibility towards this new project, as I was a member of the original Gundam team. In that sense, I felt responsible that we hadn’t managed to make an anime that could endure for 40 years or so. Obviously, I was no longer an animator, but I still wrote manga. I thought that if it did happen as a manga, it would take a very long time to do. So I spoke with the head of Sunrise and said that if I did a manga of the original Mobile Suit Gundam it would take at least three years. I was told this was far too long. In the end, it took me ten years to do. The manga of Gundam The Origin was also successful commercially, so I was happy about that.”

“I also added a new part in Gundam The Origin, which was the past of Char and Sayla. So 6 volumes out of 23 are about this. This part was completely original and done by me. So once the manga became very popular, Sunrise began to think about a possible anime adaptation but they were also reluctant to re-animate content from the original Mobile Suit Gundam without Tomino’s involvement. Instead, the safest landing point for Sunrise was to animate the new part I added to the manga, as that didn’t involve Tomino in any way and also wouldn’t disrespect his work.”

“While I had already retired from animation by this point to work on manga, but I felt that if my manga was to be adapted into animation, then I wanted to do that. So this is why I accepted the offer from Sunrise to handle the animation of Gundam The Origin.”

Announced in 2014 to celebrate the 35th anniversary of the Gundam series, Mobile Suit Gundam: The Origin adapted Yasuhiko’s manga of the same name into a six-part OVA series. Released from 2015 to 2018, The Origin details the events leading up to the One Year War and the origins of Casval Rem Deikun and Artesia Som Deikun, who would go on to become the legendary Zeon figure Char Aznable and White Base crew member Sayla Mass.

“However, if Tomino suddenly said that he’d want to re-animate the original Mobile Suit Gundam, then no one would be able to stop him. His presence is so huge when it comes to anything related to Gundam. That said, if this remake were to happen, that would be done by the present-day Tomino. It would be very different in terms of the atmosphere when compared to the original. So I’m not overly keen to see something like this happen. That said, Tomino is old like me, so I doubt he would want to do this anyway.”

“When it comes to the episode Cucuruz Doan’s Island from Mobile Suit Gundam, this was effectively a side-story. So when plans are made on doing digest-type movies, these kinds of episodes are prime candidates. During the production of the original anime, this episode was outsourced to a completely different team to give the main team more time to focus on the core story. This meant the episode’s animation quality was bad, but it still had a great story. That means when I went to the head of Sunrise and asked if I could re-animate it and he said there were no issues with that.”

Yasuhiko also provides some insight into his misunderstood relationship with Yoshiyuki Tomino.

“During the original Mobile Suit Gundam, my relationship with Tomino was very positive and productive. After the success of the series though, Tomino shut out everybody else and acted as though he was the only person responsible for its success. So there was almost no communication between him and I after this, which made it very hard to work on Gundam. After all, if you have to work together, there needs to be communication. This changed with Gundam F91, as communication was reopened. However, I only worked on the character design for Gundam F91, as I had retired from animation at that point.”

The interview concludes with Yasuhiko reaffirming his respect for the larger than life Gundam creator.

“As for Tomino, he is an unique and a great creator, but he doesn’t communicate clearly or has logical consistency. This means his stories or explanations can be hard to follow. Respecting him as a great creator is one thing, but handling his charisma is something else entirely. I think looking only at Tomino’s charisma is the wrong thing to do. He is very easily misunderstood this way and is often misquoted, which then gets out of control. Focusing on his charisma then is dangerous and misleading. So the whole aspect of the original Mobile Suit Gundam being untouchable without Tomino is part of this worship of this charisma. People sometimes think that I look down on Tomino, or even hate him. This is not true. I feel I am the one that respects Tomino’s talent the most. By contrast, I feel I am very easy to understand, but I think that is probably indicative of me not being that great a creator.”

Mobile Suit Gundam: Cucuruz Doan’s Island is Yoshikazu Yasuhiko’s upcoming film. The movie will be a new perspective on the fifteenth episode of the same name from the Mobile Suit Gundam series. The tagline for the new film is “Gundam, rising again—“ and is set to release early Summer 2022. 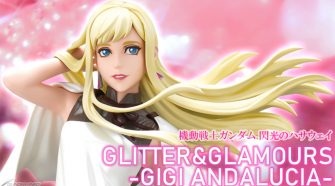